The registration for the SINCA online debate on September 13 is coming along.  Quite a few people want to discuss/debate Universal Basic Income, while the Olympics has not attracted enough number of people.  We just informed the members of Affirmative and Negative for UBI  so that they can start preparations for debate.  (As UBI is not that well known yet in Japan, it will be a good opportunity to study first and argue.)

For Olympics topic, not enough people registered and thus we decided to have general discussion on the topic rather than in the form of Debate. I am very much looking forward to this session, a week from Sunday.

Having this type of regular events gives me structure during the time that Covid-19 disrupts many routines.  It is one way of keeping you safe and SANE!

Talking with my family who live in the US, things are quite crazy there, no comparison with that in Japan.  No wonder there has been many apps for meditation and physical workout.   My choice would be daily jog/bike AND music. 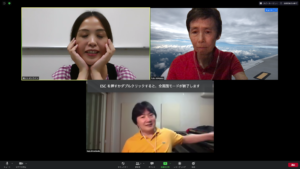 I just listened online the concert by Japan Phil, conducted by Kazuki Yamada at Suntory Hall.  It was very nice to hear/watch people (both artists and audience) happy to be back to the live concert. Kazuki (whom I had a talk the other day) seemed to come back to life and looked very happy.