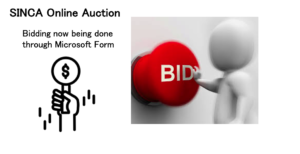 Last night, we hosted SINCA online auction for the first time. The concept was to explore marketability of your hidden skills/assets.   We tried “real” auction along the same concept before several times at GAS reunion and Davos Experience in Tokyo series. But it was the first time to try online last night.

We had close to 30 participants who registered  and 13 items were offered for bidding.

The session began with me explaining the process and went directly to the first item offered.  Each item was explained by the sponsor and some question and answers followed. (Due to time constraint, I cut some of the Q & A parts from video.  It is still quite long for 45 minutes.)

After the  explanation of offered items by the sponsors, we were ready to start the bidding process. That was when things went haywire.  Though the support person set up sugukiku site for bidding, we could not go beyond item 3.  After we tried to 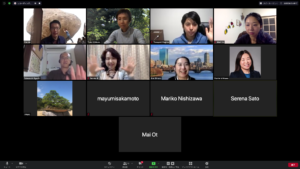 figure out, in vain, some of participants suggested Microsoft Forms and we tried.  As it was getting late and many of us (including me) were not  familiar with MS Forms, the confusion continued.

I should have stopped the session then (it was already 10 pm and I was getting so tired after a long day), and asked participants to wait for the follow up.

This morning, the support person set up Microsoft Form and now bidding is (I hope) in process.  Participants could bid until midnight tomorrow (Tuesday, Oct. 20)

I made a video of the session (my intro and 13 items explained by sponsors.  I cut most of question and answers as it was getting so long. It is long (45 minutes), but the list is shown at the beginning, so you can take a look at the items of your interest by skipping other parts of video.   Here is the link to the video.