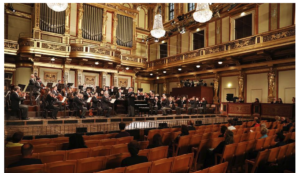 I saw the news that Vienna Philharmonic had the first concert in a few months at their hall in Vienna, Austria.  In order to maintain social distancing, quite a few seats were left open.  Beethoven’s Fifth among others were performed.  It wad such emotional scene as orchestra members as well as the audience were so moved.  I myself have had some experience that live music reach very deep part of my heart.  As it is performing arts, absence of live performance must have been so hard for the artists.

I know, however, the creative initiative by Dai Fujikura who composed the music entitled “Longing From afar” and have different orchestra/choir perform the same piece.  It is quite amazing attempt.(see video below)

Thinking about the power of music, I recall Amazing Grace sung by then President Obama at the funeral of the reverend who was killed in gun shoot in 2015.

Judging from many scenes during the Covid-19 where people sing together, I realize how beautiful ad powerful the music can be for us.