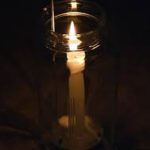 This morning, my apartment complex had to undergo several hours of no water and no electricity, for overhaul of main equipment and facilities.  We have been informed of it for several days and I was more or less ready for it. I took a shower before it hit us and got dressed and ready to go out later on. I had my bath tub filled with water (so that I can flush toilet) and had some water tank for drinking etc.  And yet, when it happens, I found it so much trouble, as I cannot wash my hands as easily as I usually do, much less wash dishes etc. after I use them and had to leave them as they are in my sink.  The central heating system was down, and it was good that it was not too cold today.

What was most troublesome was that elevator was not working and we had go up and down the stairs. The halls and stairs had no window and thus totally black. When I opened my front door to go down the stairs, I could not see a thing. Going down the stairs (when you do not use them, as it is for emergency mainly) in the darkness was quite scary.  I used the light on my smartphone, as I did not have flash light handy.

Now I realize how much people suffer when they are hit by hurricane and other extreme weather and suffer from no electricity and water for several weeks, and sometimes for months.  Utility is literally “lifeline” and now I understand the true meaning of it.  We take these things for granted and easily forget how hard it is to live without them after the disaster strikes.  Though it was a hard lesson (not so much compared with those in the disaster areas) for me, it reminded me of the importance of utilities and daily necessities.  We can live without TV, radio, smartphone and PC, etc., but having no basic things such as water and central electricity makes life so miserable and desperate.  Now I see the importance of some NPO working on providing inexpensive sources of electricity and devices to make drinking water in many areas.